Piazza Navona during Christmas in Rome

Piazza Navona with the Christmas stands built up

Piazza Navona becomes the heart of the Roman Christmas market usually starting from the 1st of December until the 6th of January.

This occassion is dedicated to an Italian Folklore; a very old lady called La Befana riding on a broom, covered in soot because she enters

people's houses  through the chimney, comes on the night of the 5th to the 6th January and brings candy to the good kids and and charcoal

to the kids which weren't so good throughout the year.

Usually what happens is that the stockings get filled up with candy, figs, dates and honey and kids usually only find a small piece of black

charcoal, made out if sugar, in the morning when they wake up.

Her name is Befana then it derives from the Feast of Epiphany on the 6th of January, which also means the manifestation of the Divinity.

The adults belief that the Befana will sweep their home floors and thanks to her sweeping, she'll also sweep away all the problems the family

On the 6th of January a big event is held on Piazza Navona, especially for the kids! 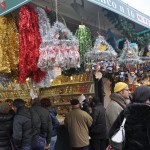 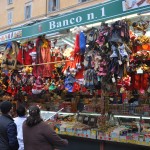 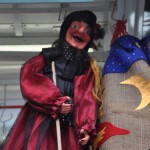 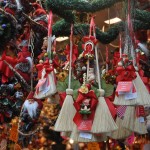 The Befana doll on a broom 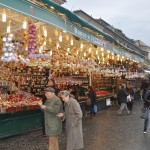 The Christmas lights of the stands are fascinating 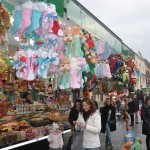 Sweets and candy to buy at Piazza Navona 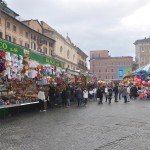 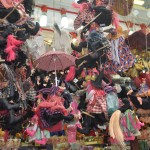 Many toys are sold on the Piazza Navona Christmas market 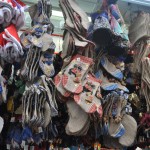 Colorful stockings are used in Italy as well 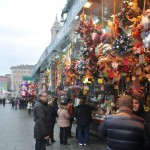 Piazza Navona with the Christmas stands built up 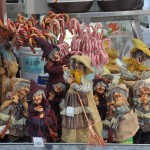 The Italian “La Befana” on a broom