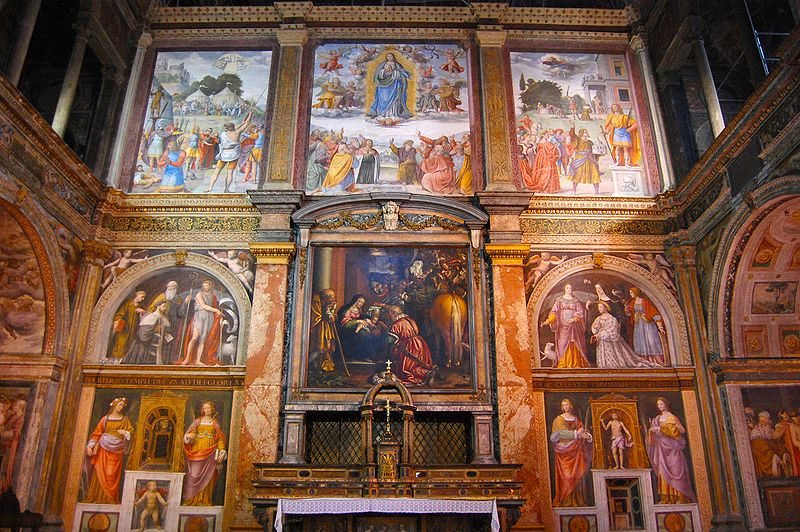 Saint Maurice al Monastero Maggiore is tucked away in Milan and a little hard to find, but very nearby the Duomo. The church, from the outside, has a simple exterior, but once you get inside you will be astonished.

Chiesa di San Maurizio al Monastero Maggiore is one of the oldest churches in the city of Milan. From October to June, this church, holds a Sunday mass in celebration of the Byzantine Rite, or the Rite of Constantinople. Aside from Sunday services, the church also serves as a popular venue for concerts.

Like other churches, it took several years to complete. In fact, the edifice was finished only in 1518, which is more than a decade after. It was Cristoforo Solari who finished the two-part building. One part is for the faithful, the other for the nuns. Hundreds of years after the edifice’s completion, the nuns were no longer allowed to cross over the wall that divides the edifice.

Inside Chiesa di Milano there are beautiful frescoes on the walls plus an impressive altar. You will find the oldest pipe organ in Milan. This very large and impressive organ was built in 1554. Several efforts are being carried out in order to restore this precious possession.

As I mentioned earlier, Saint Maurice al Monastero Maggiore has two sections. Make sure you walk to the left side and towards the back. Enter the second section through a small door to the Nun's Hall. You will find a hidden treasure trove of beautiful, amazing 16th century frescoes telling biblical stories. Many frescoes are done by Bernardino Luini. Also take the time to read the plaques (in Italian and English) describing the amazing artwork that you're seeing, it will definitely enrich your experience. You can take as many photos as you wish, but without any flash.

Admission to the church is free, but there is a box into which you can place a donation. There is a fee for the archaeological museum (superb collection of ancient artifacts). It is really worth a visit.

Chiesa di San Maurizio al Monastero Maggiore is open to the public from 9:30 in the morning until 5:30 in the afternoon, Tuesdays through Saturdays.

The church is not available for tours on Sundays of October to June because again, services in observance of the Eastern Orthodox tradition are being held.

TIP: A guided tour to Chiesa di Milano is available for less than $70. In addition, to this church, you will also get to see Da Vinci’s “The Last Supper” and visit the Church of Santa Maria presso San Satiro.