What is the Vatican? Home of the Pope and the catholic church

The Vatican city, also known as the Holy See, is a sovereign city-state within the city of Rome. They have their own license plates on their cars, their own flag and very own passports! On the 11th of February 1929 Vatican City became independent from Italy. The Head of State and Government of the Vatican is the Pope himself. It's also the seat of the Catholic religion since 1378 and yearly it has more than 5 million visitors!

Where is the Vatican?

The Vatican city is the world’s smallest recognized independent State of the world, being only around 110 acres! Vatican city is inside the city of Rome, Italy. The name “Vatican” is Latin and means “Mount Vatican” and the territory which is all surrounded by stone walls include St. Peter’s Square, the Vatican Gardens and the area around Via della Conciliazione, located next to the Tiber river. There is no pass port control when coming or leaving the city.

The Vatican also has a special police force, namely the Pontifical Swiss Guards which are meant to protect the Pope. This type of military force was founded by Pope Julius II on the 22nd of January 1506. To become a Swiss Guard you have to have the following features; be Swiss, be between 19-30 years old, be Catholic, speak four languages, be 5 foot 9 inches or taller and come from the Swiss military.

Vatican City has no formal official language. They usually use Italian in its legislation and official communications. Even in shops, restaurants and on the streets people speak Italian. 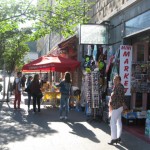 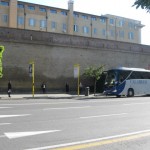 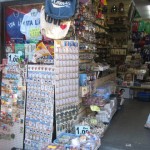 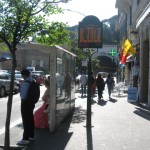 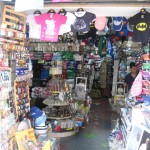 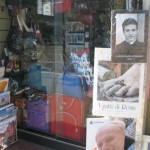 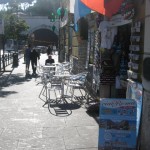 This is the street where the bus Nr. 64 stops that comes from the Termini train station 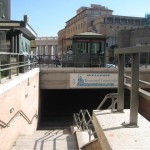 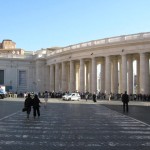 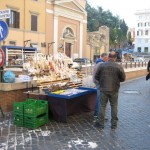 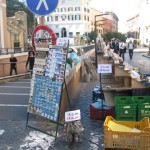 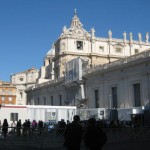 This is what you will see walking from the St. Peter's Square to the Vatican Museums 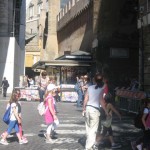 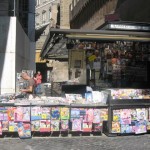 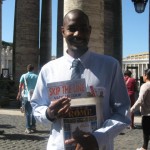 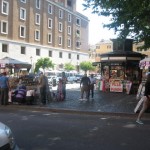 Many souvenir stands are around the vatican walls 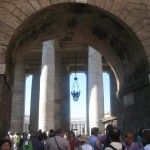 Many tourist are going to the Vatican every day 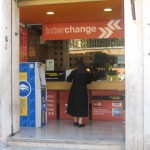 An exchange place in Via di Porta Angelica 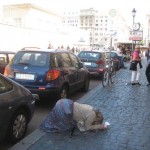 A gipsy lady asking for money

What you can expect to see when visiting the Vatican City

Vatican City domiciles some of the most remarkable art work in the world! It's impossible to see everything in one day because with all the line-ups and things to look at it'll take you a while! It is clever to choose before what's going to be the most interesting things for you to look at! You wouldn’t find many explanations next to what you’re looking at inside the museums so I’d recommend you and audio guide, which you can pick up at the entrance or a book, should you be doing the tour without an authorized guide. You'll save yourself a lot of time by booking an authorized guide tour (around euro 33.00/person) and you can skip the long lines, especially high season (May to October)!

Vatican City also has the Vatican Gardens which actually takes up a big part of the Vatican territory. It beholds small ponds, beautiful fountains and flower beds inside its walls. You are obliged to book a guided tour either online – the tickets can then be printed – or you can go directly to the Vatican information office at St. Peter’s Square, on the left side looking at the facade of St. Peter's and buy the tickets there. The cost is euro 18.00/person. Tours in English are done from Mondays – Saturdays (except for Wednesdays) at 9.30AM. In Italy things change quite often, so I’d recommend you to contact the Vatican Tourism Office before you head off! Tel. 06-69881662

Roma Cristiana offer Open Bus Travel Cards were children from 0-6 travel for free and adults pay 21.00 euro/person for 1 day and 33.00 euro/person for 3 days. Together with this offer you can also travel with the normal bus, metro, tram and take the train from Rome to Ostia (beach town) for free!

For 5.00 euro/person you can also visit St. Peter's Prison. You'll get an audioguide to go with it. Again, children from 0-6 are free of charge!

St. Peter's Square said “Piazza San Pietro” in Italian, is one of the most famous squares in the world. It’s the big square you see in front of the St. Peter’s Basilica and is circulated with many doric columns. Many Catholic pilgrims gather here to see the Pope preach and give his blessings from one of the windows of the Papal Apartments which are to your right, standing on St. Peter’s Square, facing the Basilica.

St. Peter's Basilica called "Basilica San Pietro" in Italian, is one of the biggest churches of the world. The late renaissance Basilica overlooks the grand Piazza and the dome can already be seen from a great distance. St. Peter lies in his tomb inside the church below the altar together with many other Popes as this is tradition. He was one of the 12 Apostles of Jesus and the first Bishop of Rome. Construction of St. Peter's Basilica began in 1506 and was completed in 1626.

Vatican Museums called "Musei Vaticani" in Italian. The museums were founded in the early 16th century by Pope Julius II.  The Vatican Museums hold some of the most famous sculptures and important respected works of renaissance art treasures in the whole wide world! It’s definitely worth a visit. You’ll see the Sistine Chapel, Raphael's Rooms, Pinacoteca, Gregorian Egyptian Museum and much more!

To enter the Vatican museums, the Sistine Chapel, and the Basilica San Pietro you must conform to the Vatican's dress code, or you will be sent back by the strict guards stationed at the doors. There is only a simple rule to follow for men and women; shoulders and knees must be covered and you must wear shoes! If you’re wearing a tank top just bring a light scarf or summer jacket with you! You’ll be good off in the early morning and in the late evening if you’re still around because it gets chilly! Also, you can put a pair of leggings in your purse which you can slip on under your skirt and cover your knees before entering a church. If you have a long shawl then you can just wrap it around your waist on top of your skirt. Please keep in mind not to wear any shirts which offensive pictures, slogans or writing.

Tip: If you're wearing a hat when accessing a church, then it should be taken off inside. Before entering you’ll have to go through a metal detector; leave your penknives, screwdrivers or other similar objects in your hotel.

Best time to visit the Vatican

I would really recommend you to get there early in the morning around 8.00 AM. First of all, later it gets really hot during the summer; keep in mind that if you want to go on the top of the St. Peter's Basilica you have to do another 320 stairs even after taking the elevator. Secondly, you wouldn't have all the tourist groups and line ups so that will make picture taking a lot easier and joyful!

How to get to the Vatican

Should you be coming from the historical center by foot, just cross the Ponte Sant Angelo Bridge and you’ll be right outside the Vatican City. Walking straight on, you’ll find Via della Conciliazione. Just follow that street and you’ll arrive directly at St. Peter’s Square!

Souvenirs and Shopping near the Vatican City

Believe it or not, the Vatican City is a real hot spot if you’d like something special that is not so easy to find around. Most of the articles are related to religious thoughts and idea’s but some are very expensive collector items, like the Vatican coins for example. I’ve even heard about a perfume named The Pope’s Cologne!

My recommended places to eat when visiting Vatican City

Near the Basilica you wouldn’t find anything to eat or drink so beware; take an extra bottle of water with you especially if you’ve planned to walk up the Cupola. On St. Peter’s Square you’ll mostly find the cream colored food stands on wheels which sell you Italian panini, sandwiches and soft drinks. If you’re looking for a place to sit down and rest your feet for a while, you’ll have to move outside the columns that surround St. Peter’s Square.

The pedestrian bridge that leads to the castle is magnificent 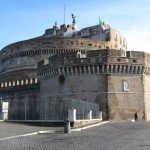 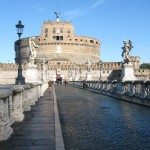 Ponte sant’Angelo is next to the Castel Sant’ Angelo 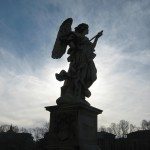 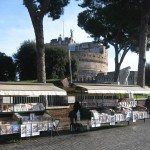 This is what you see coming over from the Vatican 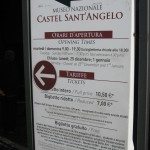 Signs indicating costs and where to go to buy tickets