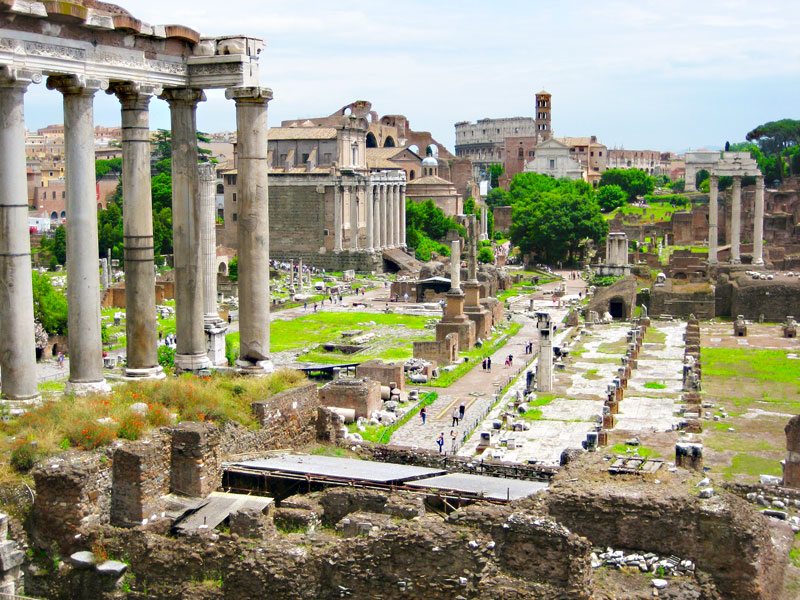 The Roman Forum is situated in a valley between the Palatine and the Capitol.

It was first developed in the 7th century BC and expanded over centuries.

The area was a marsh, so the Romans built a sewer to drain water. They made it into a center of political and social activity. It was the business district and marketplace of Rome. Over time it was expanded and they built temples, a senate house and a court of law. When the Roman Empire fell, the Forum eventually became a forgotten place. It was buried and used as a cattle pasture during the middle ages.

Like a lot of other ancient Roman buildings, stone blocks have been taken from the Forum and used to build churches and other buildings. The arch of Septimius Severus and the arch of Titus are still standing. There are some columns and stone blocks from the temples that remain.

Titus Larcius built the temple of Saturn in 17 B.C.; it was used as the public treasury. They expanded the building in 42 B.C., after a fire in the 4th century A.D. they rebuilt it. Today eight columns remain of this temple.

The Basilica of Maxentius was built in the 4th century and used as Rome's public law courts. Maxentius began the construction and was completed by Constantine. Some of the structure has been restored.

The temple of Antoninus and Faustina was built in 141 AD, Emperor Antonius Pius had this built to honor his wife Faustina after she died. During the Middle Ages it was turned into the church of "San Lorenzo in Miranda" Today this temple is the best-preserved building in the Forum.

The Curia was the Roman Senate building and was constructed by Tullus Hostilius.
It is the largest brick building in the Forum. It still has a roof and the original marble floor inside.

The Rostra was a speaker's platform originally built in the fourth century B.C. Caesar had the Rostra rebuilt in marble at the location it stands now.

There are other shrines and several more structures can be found at the Forum.

I really loved the Roman Forum. It's a large area and history is everywhere for you to explore and marvel at. You shouldn’t miss this if you are in Rome. It’s just breathtaking and if you love history, you will not be disappointed.

Make sure you wear very good walking shoes. If visiting on a hot day, bring a hat since there isn’t a lot of shade and the sun tends to bake this site.