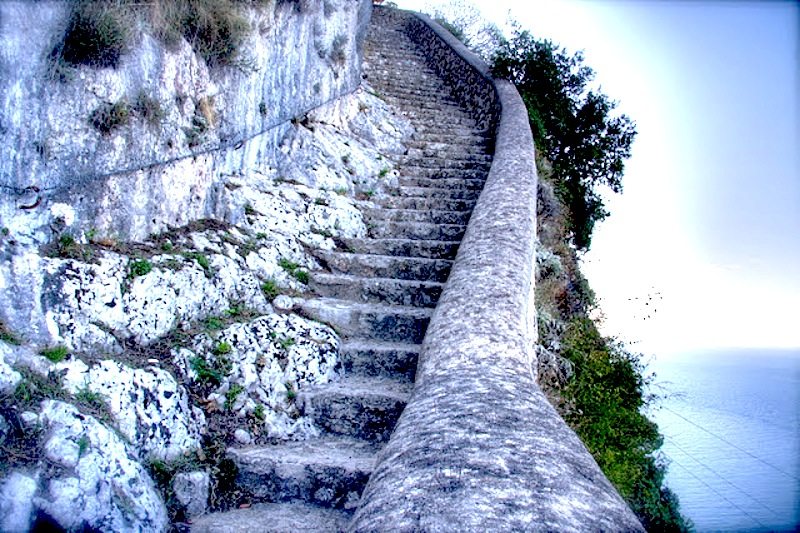 Phoenician Steps Capri begins at Marina Grande (main port of the island) and ascends up to the cliff of Capodimonte of Anacapri. Up until 1877, the Phoenician Steps Capri was the only way people traveled from Marina Grande Capri to Anacapri. According to history, construction is credited to the ancient Greeks. They carved the steps out of the rock face. It was used to transport goods up the hill. They also say women would collect fresh water from the local spring, and then walk up the steps with the water pitchers on their heads.

By taking the Phoenician Steps from Anacapri and going downhill to Marina Grande, you will come across some of the best views of Marina Grande and the bay of Naples. So, remember to bring your camera. There are about 900 steps, so be prepared. They are a bit rough and quite uneven. You will need to watch where you place your foot, as the steps are very old. It should take about 45 minutes to go down the steps. Can be a bit dangerous after rain. The steps get a little slippery, so be careful. Halfway down the hill, there is a small seventeenth century church. There is a bench where can rest. Also a terrific spot to take some pictures.

Phoenician Steps Capri is definitely worth a visit. It is very solitude, as only a few people take advantage of this spectacular spot. As I mentioned earlier, go down the stairs (obviously, a lot easier). And then, get a ride on the bus to take you back up. I would suggest going early in the morning, or late afternoon to avoid the heat. Make sure you are wearing a real good pair of sneakers. Please remember to bring water, and just take your time. It's a terrific way for burning all those carbs from all the pizza and pasta you will be eating while visiting Italy. It is a little hard on the knees and your muscles will ache the next day. However, it is worth it!

Before you take the trip down the Phoenician Steps, you should visit Villa San Michele Capri. It is situated at the top of the Phoenician Steps. It might be one the best spots on the island, with the most incredible views. It is the villa and gardens built by the famous philosopher/author Axel Munthe (The Story of San Michele). It is full of ancient and modern artifacts and all well worth a visit.