They aren't open all the time and it's better to check before if you can go inside and visit. If they are open you have to buy tickets in advance. If not, you can have a look at them from the outside when walking down the street Via dei Fori Imperiali. 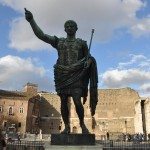 The statue of Augustus is right in front of the Forum 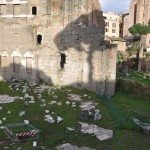 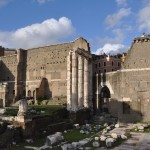 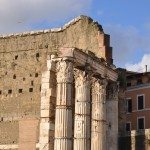 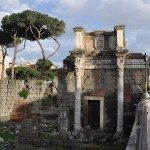 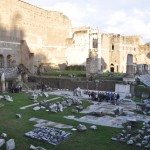 Forum of Augustus isn’t always open so get some information before. You can also see it very well from the Fori Imperiali street.

During the battle of Philippi in 42 BC, Octavian (Augustus) promised to build a temple dedicating Mars, the Roman God of War. After the battle he avenged the assassination of his adoptive father Julius Caesar. Later he became the first emperor of Rome in 27 BC. He changed his name to Augustus, and arranged for the temple to be built in a new forum named after him.

The Forum of Augustus included an open plaza lined on its long sides by colonnades off of which hemicycles opened on the northern ends. The back wall of the colonnades had niches in which were set statues of famous republican leaders as well as Augustus' own ancestors. Inscriptions below the statues showed the highlights of the leaders career. An enormous statue of the Genius of Augustus governed a room decorated with colored marbles at the end of one of the colonnades. The northeastern end of the plaza includes the Temple of Mars Ultor. It was devoted to the war god in his appearance as the avenger of the assassination of Julius Caesar, Augustus' great uncle and adoptive father. A great wall stood behind the temple and divided the forum from the noisy lower-class residential area known as the Suburra.

Remember to take a map of the site with you. It will help you identify the ruins. The best part for me were the arches and the Curia, former home of the Senate. You need to be careful because it is very dark inside to help preserve the interior. Once inside you’ll see some beautiful mosaic tiled floors and wall mosaics.

As I walked through the Forum of Augustus as the sun was setting. I was amazed at the architecture and history this mystical place held. To stand and see the huge stone buildings and pillars that were built without modern mechanical means is impressive.

If you visit Palatine Hill, you can enter the Forum of Augustus directly without reentering any lines outside. Walk down the original stone path. You'll be facing in the direction of the Coliseum on this path and enter the Forum by the Arch of Titus.

Forum of Augustus is located in front of the Colosseum and the Roman Forum. It is close to Trajan's Market, Trajan’s Column, and the Forum of Nerva.