Piazza Navona, Rome Italy a pedestrian area. It was built on the site of the Stadium of Domitian, a giant stadium that would hold 15.000 -20.000 people, which was used for athletic contests and some festivals. Piazza Navona is very likely to be the second favorite square in Rome after Saint Peter’s square. Originally Piazza Navona was called “agones” like the games that were held there. The stadium was also known as Circus Agonalis which means competition arena. Later it was called “in agone”, then “navone” and finally “navona”. The stadium was built around 80 AD by the Emperor Titus Flavius Domitianus. The Emperor Domitian ruled for 15 years which was quite a long time for those days, until he got murdered. He rebuilt many buildings in Rome after the great fire in 79 AD, were many things got destroyed. The stadium was built after the Greek model and this is why it has an oval shape which remained intact until today. In the 15th century, after the fall of the Empire, the stadium was paved over like many of the Roman sites. A new market square was born; Piazza Navona! Right off the spot, Piazza Navona became a lively market place and it has remained such until today. Before, the roman population used to flood the square during the summer and wild carriage races were held for entertainment. Pope Innocent the 10th decided to have fountains built by the most famous architects of those days! He is mostly responsible of how Piazza Navona looks today! He changed one of the worst neighborhoods those days into one of the the best places to live. To finance his project he raised the taxes on salt and meat which of course the Romans didn’t like at all! The Romans took revenge by anonymously hanging on scripts around the neck of a statue called “La statua parlante di Pasquino” the talking statue of Pasquino not far away from Piazza Navona, were they could honestly say their opinion without having to show their faces! 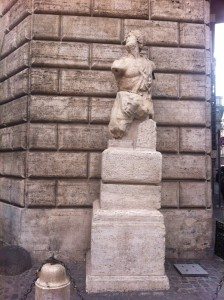 Before, signs were hung around the neck of this statue

Piazza Navona is one of Rome’s most beautiful baroque squares! The three fountains and the square church were added later in the 16th and 17th century, they are truly three of the most important fountains and Baroque church in Rome. Rome is one of the cities with the most fountains in the whole world. During the Baroque period in Rome, fountains were associated with the generosity of the Popes. Fountains meant for people to have drinking water and a refreshing splash during the hot weather, which made the Romans very happy and the Popes would also increase their popularity with the Roman folk this way. The water for all three fountains of Piazza Navona comes from the Aqua Virgo aqueduct. Piazza Navona was meant to show the authority of the Pamphili family. There was always a little jealousy between the Pamphili, the Barberini and the Farnese family. The Pamphili family, which was originally from a town called Gubbio, had bought a lot of land around Piazza Navona and they also had their home palace windows and door facing the Piazza. Those days, like even today, there were some powerful families that had most of the saying in Rome. A couple of old buildings were pulled down on Piazza Navona and the most famous architects of those days fought very hard to get the job of decorating the square. A very powerful lady of the Pamphili family by the name of Donna Olimpia Maidalchini had first chosen the architect Borromini to redecorate the square. The architect Bernini, who was friends with the Pope, gave him a silver model of his version of the fountain which then somehow landed in the hands of Donna Olimpia! Well, guess what happened; she changed her mind and gave the project to Bernini. We will see what else happens when we will talk about the Fountains of the four rivers on Piazza Navona and how the architects were able to enameled the duels they had with each other forever in history. After 1870 the square was paved with the typical coble stone called sampietrini and nowadays, vendors of very beautiful paintings and other art objects have built their little stands and pass their days selling to locals and tourists. Often you’ll also see acts from artists that have a little show going on in the middle of the Piazza or musical performances. In the 1800 the market place was moved to Campo de Fiori which is a short walk away from Piazza Navona. Many cafes and restaurants face into the square where locals and tourists sit outside and people watch, read a newspaper or just sit and relax. Most all of the places are priced double because of the location and the view.

There are 3 fountains in Piazza Navona. The middle fountain called Fountain of the four rivers is the most important and was done by the most famous architect those days; Bernini.

At the Southern end you'll find the fountain called Fontana del Moro because the Romans thought the statue's face had African features.

On the northern end is the Fountains of Neptune. It represents Neptune wrestling an octopus.

Right across the middle fountain you'll see the  impressive Sant' Agnese in Agone Church, dedicated to the poor young girl Agnese which was killed because of her belief.

If you're interested in finding out more information about these fountains and the Sant' Agnese in Agone Church, feel free to read our posts or simply download the information and listen to it while walking through Piazza Navona.

Tours which can take you to the underground of Piazza Navona:

Remnants of Domitians's stadium have still remained beneath Piazza Navona up until today! If you’re interested in visiting this enchanting underground universe, you can get a guided tour which start at Piazza Tor Sanguigna, 13. The entrace to the Piazza Navona underground area, you have to go to the north end, to Piazza Tor Sanguigna. It's usually only open on weekends. The opening hours are listed on the gate. While in Rome you can call the number 060608 and press 2 for English. At the moment they are working underneath Piazza Navona and therefore no tours can be taken until further notice. It’s always better to call and ask before! Insider tip: Also, there’s an association named Roma Sotterranea which is specialized guided tours to underground sites normally closed to the public. If you sign up with them you might be able to join on more than one underground tour! Another Association called amici di Roma does underground tours as well, which is maybe easier for tourists to access! Phone +39 06 61661527 or +39 06 66734778 or +39 338 3256383. 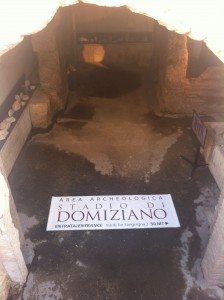 See the Stadium of Domiziano underneath Piazza Navona

What other attractions are near Piazza Navona: The Pantheon