Rome during Spring and Summer

Good months to visit are May and October.  The weather in Rome Italy in early May, the azaleas are placed along the Spanish Steps, the temperatures are warm but bearable, outdoor dining is a pleasure, and for those who enjoy the beach, Fregene and Ostia are short rides away on public transportation.  Fregene, by the way, is the cleaner, less polluted of the two beaches. 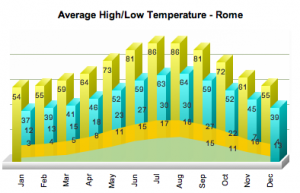 Temperatures range from the 70s to 80s Fahrenheit and it is relatively dry.  In October, temperatures are still warm, generally in the 70s, and the sun creates this golden glow as the day progresses into evening. But you can get sudden and heavy downpours and evening can have a sharp drop in temperatures.

That said, Rome in March will sometimes reward you with warm, sunny days and nights that occasionally demand a light sweater or jacket. In 2005, however, the temperatures in mid-March dipped below freezing and never got above 50 degrees F during the day.  July and August can be oppressively hot.

A visit in August is not recommended, despite the lure of low hotel prices.  Prices are low because Romans are not there and the city pretty much closes shop.  It is called “Ferragosto,” the month-long vacation Romans take to beat the heat and head to the Castelli (the hills outside Rome such as Frascati, Albano, and, in the case of the Pope, Castel Gandolfo).  The term actually refers to the Roman Catholic feast of the Assumption of the Blessed Virgin Mary, celebrated on August 15.  If you are there at this time, you will be surprised by the lack of activity in this normally bustling capital.

Drink plenty of water during the hot months, and despite whatever you heard, the water flowing from any public drinking fountain (from the artistic lion’s mouth to the one that look like taller fire-hydrants), is safe, clean and refreshing.

Rome during Autumn and Winter

What should one expect during late fall and winter?  The rainy season starts in November — be prepared for downpours.  You can watch the Tevere (Tiber) rise along its walled banks, covering the walkways used in the drier months.   This continues pretty much through February, but the weather can be unpredictable.

Snowstorms can happen during the dead of winter.  Romans are unprepared for snow, and those who tried to remove it from the front of their shops and homes by throwing hot water on it obviously only made things worse.  With the Mediterranean climate, weather patterns can be unpredictable.  There are smaller crowds at this time and it will be just slightly easier getting restaurant reservations or standing in somewhat shorter lines at attractions and museums, except the Vatican Museums, where long lines exist year-round.

Also be aware that while Holy Week (which can fall any time between mid-March to late April, depending on the calendar), is a beautiful and sacred celebration in Rome, it is also one of the most crowded times to be in Rome.