Something important for you to know is that Termini train station has 3 exits. When you come out of the section of where the trains stop and keep going straight on, you’ll come out on Piazza dei Cinquecento, which is the main entrance. If you turn right, with your back to the trains, you’ll take the exit Via Marsala. If you turn left you’ll come out in Via Giolitti. The building Termini train station, also called “the dinosaur” by the Romans because of its shape, lies in between those two streets.

Where to buy train tickets

You have more than one choice on that issue! If you want, you can use the self-service machines which are right next to the main entrance, to issue your tickets, if not you can do it the old-fashioned way and buy your tickets at the counter. There are many self-service machines so you don’t have to stand in line. You can select the English, French, German, Italian and Spanish language for the automatic self-service ticket machine! You can pay with your credit card. For those of you who want to do their ticket in the traditional way, you have a Ticket Office right after the self-service ticket machines when you walk straight on towards the trains. It says Ticket Office in English and the offices are outlines with a red coloring!

Please note: some tickets must be validated/stamped before you get on the train! Ask your sales person! These machines are usually at the beginning of every track.

Very important: Very similar to a Deli department, where you grab a ticket to insure your turn, you have to do the same thing to be able to speak with the staff of the ticket office. The ticket dispenser is in front of the office to your left! You have to wait your turn until you read your number on the panel.

Next to the ticket office to your left when facing it, you also have a travel agency called Frecciaviaggi. It is possible to buy your tickets their also. Line-ups are normal so put that time in your schedule.

If you’re in Rome and haven’t bought your train ticket yet, choose an agency in the city and just walk in. But remember: the earlier you but a train ticket the better price you get! A good agency can get you good deals for trains because Italy has many offers! Insider tip: check-out the travel agency 365 near Platform number 44 near the Via Giolitti entrance. There aren't so many people inside and so the lines are shorter!

After all exits you’ll find taxis but the most comfortable exit is the main one because you have more space and it’s less crowded. 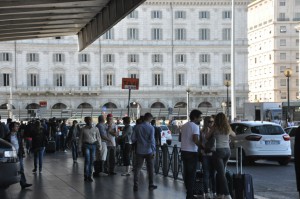 Arriving with the fast train Leonardo Express from Fiumicino Airport

There is a fast train called Leonardo Express that gets you from the Fiumicino airport to Termini station in about 30 minutes. The train stops and departs on track Nr. 24 which is to your right when facing all the trains. The Leonardo Express train isn’t in the first row when standing in front of the lines of trains but you have to walk behind on the right side until you hit the wall.

If you would like to store your luggage for a period of time while you are sightseeing or shopping in Rome, then you can leave your luggage pieces at the luggage deposit inside Termini station. 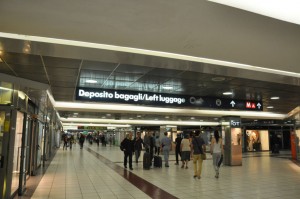 If you come in from Via Giolitti or you're somewhere else in the building, then look for the exit Via Giolitti. Next to the COIN store you'll find the elevator which will take you straight inside the luggage deposit.

Beware: it is most probable that you will find long lines to deposit your luggage! If you go early in the morning until 10.00AM the lines are still ok. The worst time to be there is from 4.00PM to 7.00PM, especially during high season (May, June, September, and October). Before you give up your luggage it will go through a metal detector. You give up your luggage, you’ll get a receipt and when you come back and get it you’ll pay.

The cost for every luggage piece is:

Some important rules you must follow when depositing your luggage:

- The luggage piece can only weigh up to 20 KG

- You are not allowed to deposit dangerous or hazardous goods

- You may not deposit your luggage for more than 5 days.

One booth is next to Frecciarossa travel agency right when you come in through the main entrance which is Piazza dei Cinquecento and keep slightly left. It is positioned in the middle of the complex. They also have SIM phone cards starting at 15.00 Euro. The other Exchange booth is located in front of the train tracks, just in front of the Police office. 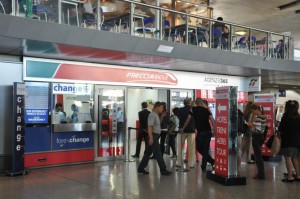 You'll find the entrance to the Metro right in the middle of the train stain but you'll have to take an escalator or steps to get down. Just follow the sign with the red M (M for Metro) and you can't be wrong because it's pretty much marked everywhere around Termini station. There is a self-service ticket machine before you walk through the gate to get to the Metro and you can choose from 5 different languages for using it which are Italian, English, German, French and Spanish. The machine is very easy to use and understand. The options are not that many so basically you can't do much wrong! If not, just go further on because after 10 meters, just in front of the Metro's entrance gate, you'll find a ticket booth with a line-up!

When you take the main exit which is Piazza dei Cinquecento, you'll find the main bus station right in front of you, slightly to your left.

As soon as you come out, to your right, you'll see a little kiosk with the writing "Public transport in Rome - Information Center" Here they'll give you information regarding transportation in Rome. You wouldn't get any tickets or maps!

You'll cross the square and see the hop on - hop off bus stop in the middle, further down to your left are all the buses. If you look to your right, you'll see a tiny little house with a friendly old man sitting inside! You can buy your ticket here!

On the right hand side of Piazza dei Cinquecento  you'll see a long line of small shops offering tours and excursions! You can buy your bus tickets there too!

Facts and History about Termini station

Termini railway station is the main railway station of Rome. The name Termini comes from the district of the same name. It comes from the ancient Baths of Diocletian which are across the street from the main entrance! Termini is the biggest railway station in Italy and one of the largest railway stations in Europe with its thirty two platforms! It has approximately 850 trains going to all over Europe and throughout Italy daily. Termini station isn’t only important for national and international travel but it’s also the main focal point for public transport inside Rome. The Termini Metro Station, which has 2 lines; A and B, cross each other at Termini and one of the major bus stations is located in Piazza dei Cinquecento. In the year 2006, Termini train station was dedicated to Pope John Paul II with an official ceremony.

In 1863 Pope Pius IX opened the first Termini station. Only a few trains went out of the city up to the Roman hills and up north to the sea side. The lines which had different stations were located in different places downtown. Later in history, when the third line was under construction, the city decided it was better to build one central station which was then named Central Station of Roman Railways. The present building which you see today was established in 1950. Termini station is 225.000 square meters big, around 480.000 people pass here daily, which means over 150 million visitors a year.

In the interest of the Great Jubilee of 2000, which was a very important event of the Catholic Church; namely a celebration of the mercy of God and the forgiveness of sins, 119 millions of Euro were spent to renew the Termini station. A lot of people were expected to visit the Eternal city and transportation was a main issue.

The Galleria Centrale – Central Gallery which is a 220 meter pedestrian promenade between Via Marsala and Via Giolitti, offers tourists as well as locals a wide choice of restaurants, fast food choices and shops!

Underneath Termini train station, which before was falling apart and wasn’t at all pleasant to walk through, the new Forum Termini was built! 14 thousand square meters of shops with sparkling windows and other commercial services of all kind are now to be found! The city thought that it might be the right way to give the necessary up boast to make the area safer. In fact, it was a winning strategy to give a great and safe environment to travelers and locals. Installed video cameras work 24 hours a day, Italian police, together with a security group, try their best to provide a peaceful surrounding.

Piazza della Repubblica, Museo Nazionale Romano, Via Nazionale, Church of Saint Mary of the Angels and Martyrs are very close to Termini train station. Basilica di Santa Maria Maggiore is in the same corner but a little further away than the other attractions.